Does that special pool lover in your life already own 20 instructional books? How about going another direction this year and getting him or her the gift of pool history? As we like to say at poolhistory.com, a sport without history is a sport without consequence. But there's plenty of literature out there to help fill the gaps. I've included some of my favorite selections (including a couple of my own books) plus some video resources and other material.  You can find each of these potential stocking stuffers online. Keep reading for all the details.


THE HUSTLER & THE CHAMP

HUSTLER DAYS
This critically acclaimed book tells the story of pool in the 20th century and of the 1960s revival brought on by 20th Century Fox film, The Hustler. The book profiles some of the game’s greatest players, including Rags Fitzpatrick and Harold Worst.  Purchase the book on Amazon.

3 GREAT BOOKS BY THE LATE, GREAT FREDDY "THE BEARD" 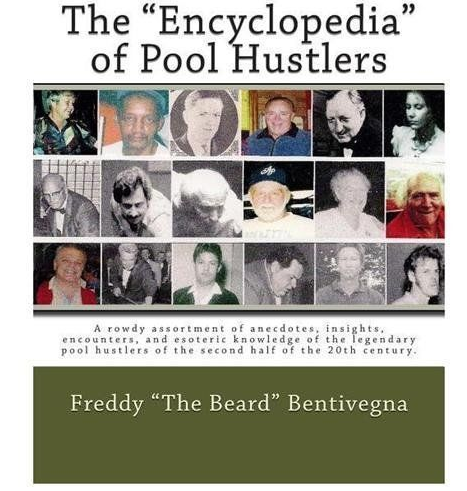 Freddy "The Beard"  Bentivegna was an old-time pool hustler, a banking expert and one of our sport's great storytellers. I was sorry to hear of his passing in 2014. I've highlighted three of his books here. Each is well worth the investment. You can purchase them directly from his website, www.bankingwiththebeard.com.

THE “ENCYLOPEDIA”  OF POOL HUSTLERS
This reference work is not anything you’ll ever read from start to finish — at least, not in any disciplined way — but it’s a book you’ll want to have around your nightstand or in The Brown Study. It’s chock full of quick and quirky anecdotes about players both famous and obscure (mostly obscure), all seasoned with Bentivegna’s aromatic brand of BS. 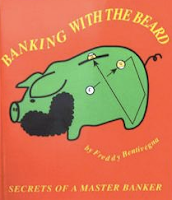 BANKING WITH THE BEARD

Freddy's first book, "Banking With The Beard," includes a banking formula that incorporates the concepts of acquired english and cue ball english. It's 200 pages long.  The tips are invaluable. 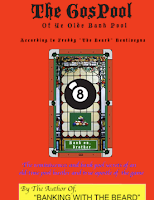 Freddy's second book, "The GosPool of Bank Pool," also runs about 200 pages long -- but about half of it is devoted to colorful anecdotes. I found myself laughing out loud as I read about Minnesota Fats, Eddie "The Knoxville Bear" Taylor, Cornbread Red and Harold Worst.

BYRNE'S NEW STANDARD BOOK ON POOL & BILLIARDS
This is the first instructional book that I ever purchased. Who knew that a collection of table drawings and shot descriptions could be so funny?  A friend of mine had lent me a copy many many years ago. After reading only about 10 pages of it, I marched out and bought my own. You should too. (And while you’re at it, pick up Bryne’s second instructional book Advanced Technique in Pool & Billiards.)

NEW ILLUSTRATED ENCYLOPEDIA OF BILLIARDS
Ever wonder how many possible ball arrangements there are in a straight-pool rack? Wonder no more. Mike Shamos, in this wonderful collection of the trivial and the historic, tells us. Here, you can learn about Kelly Pool, the Lambert Trophy, and the origin of the slang "weight." There’s plenty of pictures. As a hardback, it makes a perfect addition to any coffee table.

THE HUSTLER
There is no more important novel related to American pool as The Hustler, by Walter  Tevis. Although not based on the life of Rudolf Wanderone, it nonetheless launched his media career. The book also led to the 20th Century Fox movie and the great renaissance for our sport during the 1960s. You also can read all about The Hustler, Minnesota Fats, the 1960s renaissance -- and the interrelation between the the three -- in my own book Hustler Days (referenced above).

MCGOORTY, A POOL ROOM HUSTLER
Danny McGoorty was a poolroom hustler, ladies’ man, and drunk. Robert Bryne recorded McGoorty’s life's story, and then used it to craft one of the most delightful and hilarious biographies ever written about an American cueist. This book also includes fun anecdotes about some of the most important players of the last century, including Mosconi, Fats, Welker Cochran and even Alfredo De Oro.

WILLIE'S GAME
Willie Mosconi in his biography Willie’s Game co-authored with Stanley Cohen, speaks of Fats, Wimpy Lassiter, Irving Crane and several others. Speaking about Onofrio Lauri, Mosconi said: "You wouldn’t want him to be the guy standing between you and a championship. He was a sensational shot maker. If he got on a roll he could run out on you quicker than you could count the balls." Find the Kindle edition here.

THE BANK SHOT AND OTHER GREAT ROBBERIES


This is the autobiography of Minnesota Fats, co-written by Tom Fox and with an introduction by R. A. Dyer. It tells Fats' story is his own colorful words. A great fun read. Find it online here.

POOL WARS
Jay Helfert's great book Pool Wars is subtitled "On the Road to Hell and Back with the World's Greatest Money Players." That's particularly apt, given that Helfert here has collected stories about Charlie the Ape, Ronnie Allen, Cuban Joe, and of course Minnesota Fats. Helfert writes about brawls and sleeping in pool rooms. He has some wonderful old pictures of a crazy skinny Earl Strickland and Buddy "Rifleman" Hall. A great read.

If that special someone doesn't feel like reading over the holidays, here are a few non-book recommendations:

PHOTOS BY HELAINE GARREN
In 1970 Helaine Garren shot a series of images at Bensinger’s Pool Hall while she was a student at the Art Institute of Chicago. Garren's astounding photos have won rave reviews from Slate, the Chicago Reader and every pool publication you can think of. Buy prints directly from Ms. Garren at her website, www.helainegarren.com.

Accu-Stats
Call Pat Flemming over at Accu-Stats HQ and he'll recommend a good DVD. He's never steered me wrong once. Here's his number:  1-800-828-0397. You can also check out the website at accu-stats.com.


The Hustler is the single-most important film ever made about our sport. For that reason alone, it deserves a revered sport in the DVD library of any lover of pool history.  The scenes between Paul Newman, as Fast Eddy, and Jackie Gleason, as Fats, are inspirational. The two-disk collector's edition also includes several extra documentaries, including one entitled “Swimming with Sharks” with commentary from Max Eberle and myself. So there’s that.