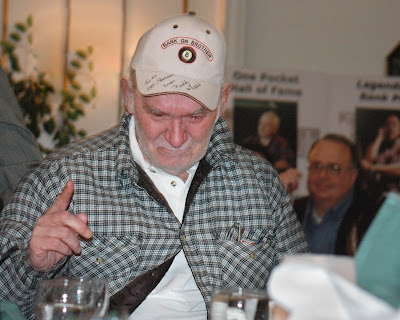 The family of Banks legend Vernon Elliott sadly reports that Vernon died the afternoon of May 9, 2009, after suffering a heart attack following several recent surgeries.

Vernon Elliott, like fellow One Pocket Hall of Fame member "Cornbread Red," was a tough country bred Kentucky road player from the old school. Except unlike Red, Vernon completely shunned the publicity of tournaments, never once playing in one. Like Red, Vernon's fearless hustling style took him all over the country, into even the toughest of poolrooms in the toughest of neighborhoods. He is often called the "greatest under-cover player of all time."

As a young man he developed as a player among the great bankers of the day in the banking capital of the universe, Louisville, KY. Among Louisville's banking legends were guys like Bob Bowles and Charlie Jones, where even Eddie Taylor was humbled now and then. A patient and observant player who could also win at 9-Ball and One Pocket, Vernon hunted the big game players, seeking out the "big score," which he was very successful at.

In a 2006 interview with Onepocket.org Steve Booth, Vernon described it this way, "I'm going to tell you something pardner, I wouldn't let nobody play cheap; if they want to play cheap, they can get somebody else. I always made 'em bet. They always thought that I was just a damned old country boy, that I couldn't do nothin'. I got big action everywhere I went, damn near, because I always had that ability to make 'em bet. They didn't ever know my real name, because I wouldn't tell them, and I never played in a tournament, so they couldn't find out."

Vernon Elliott was born February 18, 1938 in Kentucky. He raised a family of six by playing pool and hustling his whole life, until he was finally forced to retire in the 90's after suffering several strokes. During his playing years, he was possessed of one of the most powerful pool strokes of all time, and if he couldn't get a game for the money he wanted, he had an array of impossible looking proposition shots that he could win at. Once he even cashed in with Eddie Taylor on a bank shot that even the great Taylor was convinced was impossible.

Vernon was inducted into the One Pocket Hall of Fame in recognition for Bank Pool in January, 2007.
Posted by R.A. Dyer at 11:07 AM

Rest in peace Vernon. You were the best. Stardust in Hammond In is where I met you and watched you play countless matches. Mike Maruszczak Owner, Jukebox Billiards Minster In

I met Burnie (Vernon Elliott) in 1974, he helped me in my pool game so much. Giving me tips on pool, life, and ethics of a pool hussler. They'll never be another Vernon Elliott. Few people truly know Burnie. Sweet, hardly, very cold hearted. In pool, he was one of the best. Too bad around the pool hall all he did was talk and give tips. He never played one time for money back then. He would leave, then in a month or so he would show up again. He was truly a road warrior. RIP!